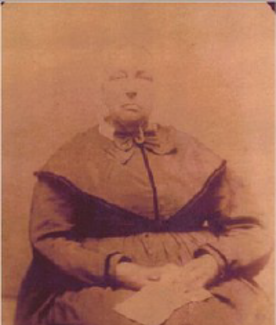 Mary Garriett 22, b. OH, is on the following page, a Servant in the household of George Hartsock.

1847 LOSES HOUSEHOLD GOODS: [Culpeper Co, VA, Bk 8/251, dated 20 Mar 1847] Zachariah Garriott was indebted to JM Hunt for $75 and Chas E Hume for $25. In consideration of the premises and one dollar Zachariah Garriott relinquished all his household and kitchen furniture, two cows, one horse, one small wagon, one set of g--, one rifle, shoemaker's tools of every sort.

1847 SUIT FOR BAD DEBT: [Madison Co, VA] John Weaver and Manuel C Strickler filed suit to collect debt of Zachariah Garriott in the amount of $68.32, that he has left the Commonwealth of Virginia, and that he is the husband of Rhoda Blankenbaker, daughter of the late Samuel Blankenbaker, who left her heir to a portion of his estate. They asked that part of this inheritance be taken to pay the aforementioned bill. The following people were also listed as heirs of Samuel Blankenbaker: Jemima Blankenbaker (Samuel's widow), Julia Wayman, Frances Wayman (wife of Kentley Wayman), Isaac Blankenbaker, Abraham Blankenbaker, Charity Blankenbaker, and Elizabeth Rouse, all children of Samuel and Jemima. Hiram Yager was appointed executor of the estate.

1848 DEFENDANT NOTICE: [Madison Co, VA, dated 3 Jul 1848] John Waver (Weaver) vs. Zachariah Garriott and heirs of Samuel Blankenbaker: The defendants did not appear in court or give security, and are not inhabitants of the state. The court ordered their appearance, ordered notice to be printed in Fredericksburg newspaper and on courthouse door, for defendants to appear on 4th Thursday September next.
Hiram Yager was appointed executor of the estate. "As your orators are without remedy at Law, they are constrained to come into this court of Equity to enforce their rights in the promises, they therefore pray that all the right title and interests which the said Zachariah and wife are entitled to in the aforesaid estate of the said Samuel Blankenbaker may be attached in the hands of the said Hiram Yager, exr. as aforesaid and Jemima Blankenbaker widow of the said Samuel and of such others of the above named partners as may hold the same in their **** or under their control, that the said Zachariah Garriott and Rhoda his wife may be restrained from disposing of their said interest and that the other defendants may be restrained from permitting such interest or so much thereof as may be in their (possession?) *** or control from *** them from: that the aforesaid interest of the said Zachariah Garriott and Rhoda his wife in the estate real and personal of the said Samuel Blankenbaker may be appropriated to the payment of the said debt *** by the said Zachariah Garriot to your orators as far as may be *** that the said Hiram Yager exec. as aforesaid, Jemima Blankenbaker, Julia Wayman, Kirtley Wayman and Frances his wife, Isaac Blankenbaker, Abraham Blankenbaker, Charity Blankenbaker, Elizabeth Rouse, and Zachariah Garriott and Rhoda his wife may be made part *** to this Bill and true full and perfect answers make to the same and each part thereof and that your Honors would grant such a true further General whif as may appear right in the *** and as is in only bound they will *** pray and Let a subpoena ***." Signed AR Blakey, July 13 1848 [Blne4@aol.com]

1849 DEFENDANT RESPONSE: [Muskingum Co, OH, dated 10 Aug 1849] Zachariah Garriott appeared before a Justice of the Peace and denied the truth of the allegations of the plaintiffs Weaver and Strickler, and argued against recovery, "Said act limits the recovery of store accounts to two years."

1887 OBITUARY: Tunbridge May 20, 1887: Died, Zachariah Garriott at the home of his son, John M Garriott on Friday, the sixthe inst. at 3:20 pm, at age 82 yrs, 7 mo, and 18 days. Father Garriott was born in Virginia Sept. 18, 1804, married Rhody Blankenbicker, who was born Dec. 8, 1804, in same state.
In 1847, he emigrated to Muskingum Co, Ohio. From there he removed to Vinton Co, same state. By this time Mr and Mrs Garriott were the parents of seven children, three sons and four daughters, the eldest daughter had previously married TW Jenkins now residing in Texas Twsp. of this county. While here his next four eldest married. Henry A now living in Clinton this county. Franklin B who died May 1877 in Tunbridge, Julia A wife of John Showmaker now in Missouri, Martha E near Dewitt, this county know as Mrs Nesbitt....In 1861 Mr and Mrs Garriott accompanied their children to this state and stopped in Tunbridge Twsp. Mrs Garriott died on the seventteenth day of Sept.1882. [Charlene Boice] 6
Rhoda's father, Samuel Blankenbaker, 1st married Amy Yager. Samuel and Rhoda were descendants of the 2nd Germanna Colony that settled Spotsylvania County under Virginia's Governor Spotswood in 1717. The Blankenbaker family made its way to Culpeper Co, and, later, to Madison Co, VA.

1882 OBITUARY: Mrs Rhoda Garriott died on Sat. the 16th inst. at her home in Tunbridge near her 80th birthday was buried Sunday in Howard Cem. (Tunbridge Cemetery). Mrs Zachariah Garriott is mother of Mrs TW Jenkins.

1901 OBITUARY: Mrs Sarah Owens, widow of Felix, who died a few months ago died at the hospital in Decatur Saturday. The Remains were brought to Clinton and taken to the home of John Ellis from where the funeral was held Sunday. Sarah E Garriott was born in Virginia March 1, 1847 and her parents came to Illinois in 1861. In 1865 she married Felix Owens two children survive her: Fred and Clem, who live near Rowell, where she made her home. Two brothers Henry and Richard Garriott live in Clinton.