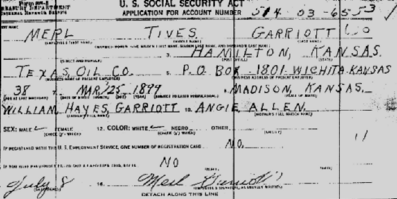 He leaves to mourn his passing: his wife, one son, Charles, Jr, and two daughters, Vivian and Juanita, of the home; his mother, Mrs Angie Garriott, two brothers, Merle and Leslie, and one sister, Mrs Ruth Cragen, all of near Hamilton; one sister, Mrs Dorothy Tatman of Lamont; one sister, Mrs Gladys Howe, of Eagle City, Oklahoma; and many other relatives and friends. He was a loving husband, a kind father, and always honest in his dealings with his fellowmen.

1966 OBITUARY: Merle T Garriott Dies. Madison--Merle T Garriott, a retired farmer and longtime resident of the Madison community, was found dead this morning in his home. According to the district coroner, Dr Virgil Hollenbeck, he had been dead for several days. Graveside services will be at 3 pm Thursday in Blakely Cemetery. The Sexton Funeral Home is in charge of arrangements.

Mr Garriott, the son of William H and Angela Allen Garriott, was born and reared in the Madison area, then lived for 20 years in Oklahoma before he returned in 1929 to Madison. He was preceded in death by four brothers and sisters and he is survived by one brother, Leslie, of Madison, and three sisters, Mrs Murrel (Gladys) Howe, Fay, OK; Mrs Irl (Ruth) Cragan, Madison, and Mrs Albert (Dorothy) Tatman, Lebanon, MO.

1994 OBITUARY: Pearl J Garriott, 70, of 817 Southwest Boulevard in Madison died Saturday, May 21, 1994, at the Madison Manor Nursing Home.
She was the daughter of Edward and Maudie Booth Jardot and was born September 11, 1922, in Yale, Oklahoma. She attended school in Cushing, Oklahoma, and in 1954 she moved to Madison from Virgil, Kansas.
She was a homemaker, owned and operated Bayne's Cafe in Madison and worked at Madison Manor. She was a member of the United Brethern Church in Cushing.
She married Roland Bayne in Pawnee, Oklahoma, on March 25, 1938. They were divorced later. She married Leslie A "Bud" Garriott in Madison on November 25, 1964. He died on April 8, 1990. Her parents, an infant daughter and a brother also died earlier.
Survivors include two sons, Albert W Bayne of Madison and Ronald S Bayne of Sioux City, Iowa; one daughter, Connie Thomsen of Lamont; one sister, Viva Wilson of Texas, and four grandchildren, Scott and Jeremy Thomsen of Lamont and Jennifer Harding and Nichole Bayne of Sioux City, Iowa.
Funeral services were held Tuesday, May 24, at 2:00 pm at the Wilson Funeral Home in Madison. The minister was the Reverend Howard K Busby, the organist was Mrs Richard Baxter and the vocalist was Larry DeWitt. The pallbearers were Robert Kimberlin, John Wiedmer, Roger Mackey, Randy Talkington, Bruce Stubbs and Rex Turner. Burial was in Blakely Cemetery at Madison.

2011 OBITUARY: Vivian G (Garriott) Fowler, 85, Emporia, died on January 9, 2011 at the Holiday Resort Care Center in Emporia, KS. Vivian G Garriott was born on May 10, 1925 in Canton, Oklahoma to Charles M and Helen Boring Garriott. She attended Quincy school in Greenwood County and graduated from Emporia High School. She earned her bachelors and masters degrees from Washburn University in Topeka, Kansas. Mrs Fowler taught school for 22 years. She taught at Minneapolis, Kansas, and Waterville, Kansas before completing 20 years at McCarter Elementary School in Topeka, KS. Mrs Fowler was a member of Fairlawn Nazarene Church in Topeka, Kansas and attended the First Church of the Nazarene in Emporia, Kansas.
She married BL Fowler on July 10, 1947 in Topeka, Kansas. He died on June 3, 2004 in Topeka, Kansas. She is also preceded in death by one brother Charles Q. Garriott and one sister Phyllis Miller.
Survivors include: two sisters, Juanita G Gunkle of Emporia, and Roberta Willard of McPherson, Kansas; and a brother, Melford McGuire of Parkville, Missouri. Mrs Fowler is also survived by nieces, Patricia Kuhlmann of Cutler Ridge, Florida; Nancy Lawson, Carly Gunkle, and Kelsey Gunkle of Emporia, Kansas; Cara Blevins of Baltimore, Maryland; and Briana Bonomo of Phoenix, Arizona; nephews, Bill Garriott of Tampa, Florida; Alan Gunkle, Eric Gunkle, Brian Lawson, Joshua Lawson, and Brendon Gunkle, of Emporia, Kansas.
Graveside services will be 11:00 am Wednesday, January 12, 2011 in the Fowler Cemetery, east of Emporia. The service will be conducted by Pastor Mark Henson of the First Church of the Nazarene. Memorial contributions may be made to the Emporia First Church of the Nazarene and sent in care to the funeral home.

BIOGRAPHY: My grandfather William M Garriott (1836-1877) was a descendant of one of three Garriott brothers who came to America from France, date unknown. All three served in the Revolutionary War, and according to legend, shared sleeping quarters with General Lafayette. My grandfather was married to Ellender (Ellener) Jane Blakely (1831-1872), daughter of Samuel and Martha Black Blakely, all of whom came to the Kansas Territory from Indiana and settled on the north branch of the Verdigris River, northwest of present-day Madison, Madison County about 1854, though some authorities report 1857.
Samuel Blakely (1806-1878) was my great grandfather. He had a son Daniel D Blakely (1845-1916) who married Mary Matilda Hensley (1851-1934), daughter of another Madison pioneer. Mary Matilda attended the log cabin District No 1 school, located on Blakely land, an area which Samuel Blakely later donated for the Blakely Cemetery site. The oldest daughter of Daniel D and Mary Matilda was Martha (Mattie) D Blakeley (b. 1871) who married Fred Pees, who had come to the area from Ohio at age 17. Thus the Blakely-Pees descendants in the Madison area are my cousins.
My father Hayes Thomas Garriott was born December 6 1867 to William M, and Ellender Jane Blakely Garriott, and grew to manhood in Greenwood County. On November 3, 1892 he was married to Angeline (Angie) Allen (b. Sept 12, 1875), daughter of Charles Wesley Allen and Marian Ellen (Rumley) Allen. They and their children had come from Missouri to the Madison area (in) the bitterly cold winter of 1887 and settled on the old Arnett place west of Madison. Grandmother Allen caught cold, pneumonia developed, and she died a few days later. My mother was then only 10 years old. Two little sisters died within a few years and were among the first to be buried in the Andres Cemetery southwest of Madison.
My parents had four sons and four daughters. When I was one year old, we moved to Blaine County, Oklahoma, where I attended elementary school and graduated from high schol in 1928. We then returned to Kansas, locating on a farm ten miles southwest of Madison. I married Irl Cragan. My father died on the farm June 14, 1932, and "Angie", my mother, in June 1946. Both are buried in Blakely Cemetery.