CHILDREN: Lutitia and Churchill had children:

She is survived by her husband, Richard Lewis Sanford, to whom she was married for 66 years; a son, Stephen Sanford and his wife, Norma, of Orange; a daughter, Cynthia Webster and her husband, O. Thomas, of Roanoke; six grandchildren, Anita Naff, Nathan Webster, Richard Sanford, William Sanford, Stephen Sanford and David Sanford; and five great-grandchildren, Ryan Sanford, Emily Sanford, Anna Sanford, Colton Naff and Carter Naff.

She graduated from the public schools of Madison County and returned there to begin her teaching career, which spanned of 28 years. In 1947, she earned a degree in English and science from Mary Washington College and later earned a master's degree in educational counseling from the University of Virginia. She was a licensed counselor for the state of Virginia. After teaching in Madison County for five years, she was employed as a teacher and guidance counselor at Orange County High School for 18 years. Prior to her retirement in 1981, she had moved into the position of curriculum coordinator and guidance counselor at what was then known as Piedmont Technical Education Center in Culpeper County.

During her retirement years, she continued to support her interest in education by becoming an active member at the local, district and state levels of the teachers' retirement organizations. She served as a vice president and as a treasurer of the local group in Orange County. She was a member of Orange Presbyterian Church for 60 years, faithfully participating in and supporting the work of the church in many ways. She served as an elder and was the church historian for five years. She also was a member of the Orange County Historical Society, the James Madison Museum and the Friends of Montpelier.

THE SIMEON BATES HOME: 61
[photo above courtesy of Vee Cove] 61
"The home of Turner and Margaret Graves, owned by RS Graves Brothers, dates prior to 1830 and to the family of Colonel Robert Hill. Information on Colonel Robert Hill could not be located. In 1830, Edmund J and Frances R Thompson of Albemarle County conveyed their interest as children of Colonel Robert Hill, deceased, to William H Hill. This was land on which William H Hill lived. Edmund J Thompson married Frances R Hill on November 24, 1824.
"Then in 1835, William H and Sarah Hill, Robert C and Jane Hill, and Mary B Hill deeded the house and 306 acre tract to Simeon Bates. Robert C Hill, son of Colonel Robert Hill, married Mary Jane Hume, daughter of Elizabeth Hume, on August 23, 1832.
"An older house, possibly a summer kitchen or a residence, stood in the back yard. It is not known whether the present stone house was the home of the Hill family or whether Simeon Bates built the present stone house.
"Simeon Bates married Elizabeth BLAKEY on April 5, 1826. There were four children: William N SMITH, son of Fielding and Rhoda Smith, married (1) Elizabeth F Bates on December 20, 1855, and (2) Mary E BERRY, daughter of Elisha Y and Sophia S Berry, on March 19, 1881; Churchill B married Lutitia B SHOTWELL, daughter of William and Judith S Garrett Shotwell, on December 26, 1866; Martha A married BS SMITH; and Robert A married Mary J (maiden name unknown) and lived in Rappahannock County. 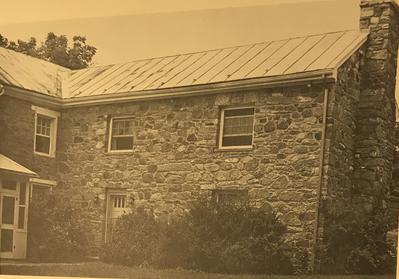