IMMIGRATION: Ambrose, and his brothers, James and Moses (according to family history) emigrated from France to America some 5-6 years before the American Revolution, fleeing Catholic persecution of the protestant French Huguenots. Another source claims that Ambrose was of a Huguenot family which fled France in the 1600's to England where many settled around York before immigrating to the Colonies. Some Garriotts belonged to the Huguenot church of London's Threadneedle Street. Virginia was a noted refuge and haven for people fleeing persecution.

1769? MARRIAGE: Ambrose and Elizabeth Blankenbaker were married (according to family history) about 1769 in Culpeper County, Virginia, and, in 1770, their first of thirteen children, Phoebe, was born. According to other family history, Ambrose first married a Mary Turpen/Turpin, although this researcher has been unable to locate a single document to confirm this.

BIOGRAPHY: "History of Washington County, Indiana," claims that Ambrose Garriott -- or Garrett-- was a revolutionary soldier. Ambrose and his brother Moses have been accepted into the "Register of Huguenot Ancestors," born in France. He served with the Virginia troops in the Continental Army and afterwards lived and farmed in Culpeper County, VA. This document states that Ambrose was born "about 1748 in France, and died "about 1825" in Washington County, Indiana. "Wash Co Veterans Memorial"
[photo courtesy of findagrave.com & richard dixon]

1796 WITNESS WILL: Ambrose Garriott was a witness to the will of Samuel Scott of Mercer County, KY written 20 May 1796. [KY Pioneer and Court Records, McAdams, Keystone printery, Lexington, KY, 1929, pg 41].

1802 KY LAND PURCHASE: [Jefferson Co, KY Court of Appeals Bk F/469, dated 15 Jul 1802] Ambron Garrett purchased 151 acres on Harrod's Creek from John Breckinridge of Fayette Co, KY, for 113 pounds, Kentucky money.
"This indenture made this 15th day of July 1802 Between John Breckenridge of the County of Fayette of the one part and Ambrose Garriott of Jefferson County of the other part. Wet_______ that the said Breckenridge in consideration on of the Sum of one hundred and thirteen pounds current money of Kentucky to him in hand paid by the said Garriott the receipt whereof is hereby acknowledged hath granted, bargained, and sold to the said Garriott a parcel of land lying in the County of Jefferson on the waters of Harrod's Creek and containing one hundred and fifty one acres more or less; being part of a Survey of 5500 acres conveyed by John Preston to said Breckenridge, and is bounded as follows _____.
"Beginning at a blazed beech corner to John Archers tract of ninety acres, and within Archer's line south cropping several h____ to the corner thereof a white oak and sugar tree on the north side of a b_____; thence west 114 pole[?] cropping a branch called Darby's run to a hickory and beech; thence North 212 poles cropping Darby's run at 20 poles to two beeches; thence East __ poles to the Beginning: with all the appurtenances th____ belonging to the sole use and behalf of him the said Garrott and his heirs and assigns forever. And the said John Breckenridge for himself and his heirs, the said parcel of Land with it's appurtenances and his heirs and assigns against the claim of all persons whatsoever will forever warrant and defend...
"In testimony whereof the said Breckenridge hath here unto ___ his name and affixed his seal the day and above written."  Signed, Sealed & Delivered...

1832 LAWSUIT: [Wash Co, IN, Probate Bk B/83, dated Sep 1832]  the heirs and administrator of the estate of Ambrose Garriott, deceased, were sued by Moses Creamer. This suit was later dropped.

1830s DEATH: Ambrose died before 24 July, 1834 [The DAR Patriot Index, Centennial Edition, pg. 1128] and is buried in an unmarked grave in a field on the Garriott family farm in Elk Creek Valley, north of Harristown [Wash Co, IN probate record, pg 83, 1832]. A large stone marker erected by descendants (of William) in 1917 is located about 3/8-mile northwest of the Mt Carmel Cemetery in Gibson Township. This land was sold to his son William after his death. 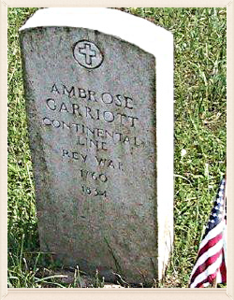 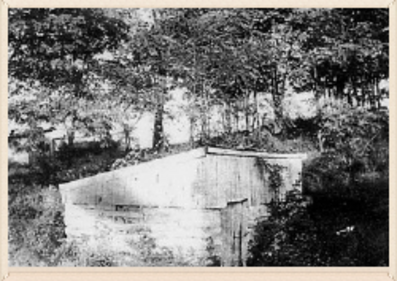