about, I assembled the pieces for pictures, other pictures, less damaged, are on findagrave.com]

MILITARY:16 Jacob Garrett (sic) is listed as a private in Captain John Prather's Company, 2nd Infantry Regiment Indiana Militia [Col. Robertson & Col. Bartholomew], in the War of 1812. He is listed on the Company muster roll for 10 Apr to 9 May 1813, roll dated Charlestown. Commencement of service on 18 Apr, and expiration of service on 9 May 1813-- term of service 22 days. He was paid at a rate of $8 per month for a total amount of $5.78.

1813? MOVE TO INDIANA: Jacob came to Indiana with his father and two of his brothers, William and Simeon. They settled in Washington County, IN, and Jacob later moved to Jackson County, IN after 1820.

1866 ESTATE SETTLEMENT: [Jackson County Court of Common Pleas, dated 30 May 1866] The distribution of the estate of Jacob Garriott, deceased, has been completed..... Willis C Owens, Administrator.​

1942 OBITUARY: Miss Nora A Easum, age seventy-two, a life-long resident of Crothersville, died at 3:30 o'clock this morning at the home in Crothersville. Miss Easum was born near Crothersville on March 6, 1870, the daughter of Lawrence B and Susan Garriott Easum. She made many friends in that vicinity who mourn her death. She was a member of the Presbyterian Church. 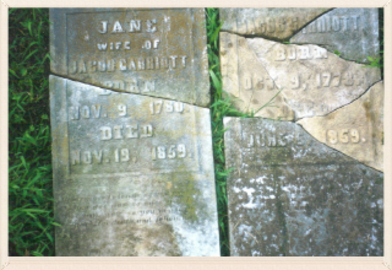