BIOGRAPHY: James Madison Garriott, born while, "His father was fighting Indians, was "the first of Jacob's children to be born in Indiana." He married his first cousin, Nancy and, through Wright's Funeral Home in Rensselaer, were both buried at the south side of "Mellie's" lot at Prater Cemetery.

[James Roscoe Garriott in interview with "Jack" Garriott] [Douglas Dale Sr Garriott]
He was a big, bearded, and religious man, attending the United Brethren Church, an "ornery cuss" who left his family for years to wander. He lived for a time in Uniontown [Perry Co, IN?], in business with Kings and Cobbs, operating a saw mill, corn cracker and brick kiln. His name was associated with Loving Densford there as both plaintiff and defendant in various civil suits. He went to Fayette Co, AL, where his daughter Rhoda and son-in-law James Mace lived, and opened a tanning yard. He treated blacks who worked for him as laborers rather than slaves, and, reputedly, was run out of town with only a pocket knife and the clothes he wore. He returned to Jasper Co, IN where his sons had moved, some of whom would not let him on their property. He lived in Pleasant Ridge with his son Albert in his later years, being estranged from his wife. 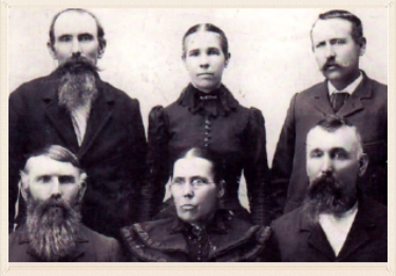