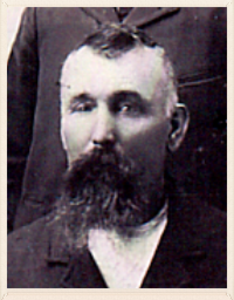 BIOGRAPHY: James Knox Garriott was born in Clark Co?, IN on December 29, 1844. He was known as "Big Jim," lean and rugged, and normally wore a red bandanna. Malachi P Comer married James Knox's ex-wife. Rumor had it that they were dating on the sly. James Knox was 'mad' enough that he married Malachi's daughter.

MILITARY:16 James enrolled on 16 Jul 1862 as a private in Company L, 9th Regiment, Indiana Legion Volunteers. He was discharged on 26 Aug 1862, serving little over one month as a guard at Camp Morton, Indianapolis, Marion Co, IN. He was described as 5'-11", light complexion, light hair, and gray eyes, a farmer.

PENSION:16 James, in his original pension [claim 1.154.956] on 23 Dec 1893, stated that, "While on guard duty [guarding prisoners [at what later became the Indiana State Fairgrounds] at Indianapolis, IN, he was drenched in heavy rainstorm which produced a deep cold that settled in his head and eyes producing disease of eyes and partial deafness from which he has suffered since." He was not treated in the hospital. He was 49 years old, a farmer, resident of Fair Oaks, Jasper Co, IN, described as 5'-11" in height, light complexion, light hair, and gray eyes. He was approved for disease of eyes on 13 Jul 1896.
In a letter to the Pension Bureau on 11 Feb 1899, James stated that his claim was rejected on 11 Oct 1898 because, "The War Department failed to show the incurrence or treatment," that James claimed.
In a letter to the Secretary of the Interior on 15 Jul 1899, James stated that this claim was rejected because, "The records of the War Department fail to show incurrence of or treatment for alleged disease of eyes and impaired hearing." He claimed to be, "Not responsible for any discrepancy in the records of War Department or failure on the part of my Regimental or company officers to properly report my case to the War Department."
In a general affidavit on 13 Feb 1899, John M Hall stated, "The above named James K Garriott and I were boys together, hunted raccoons together and associated together at the time and before he went into the army in 1862. And I know he was a young man of good moral character and sound and free from disease when he came home from his army service he was badly afflicted with sore eyes. His eyes were red and swollen and watery and have been ever since when I have seen him. He had no disease of eyes before he went to the army and if he had I would certainly have known it because I was in his company every few days from about 1858 until the time he went to camp Morton Indianapolis Indiana with the Home guards to guard prisoners of war."
General affidavits were provided by the following to support this pension application:
William H Warner, 53, of Crothersville, Jackson Co, IN, on 6 Jun 1894;
Henry C Pierson, 57, of Crothersville, Jackson Co, IN, on 5 Dec 1895;
Levin W Hudson, 71, of Paris Crossing, Jennings Co, IN, on 9 Feb 1899-- Capt of Co L, 9th Regiment
James H Phillips, 55, of Scott Co, IN, on 9 Feb 1899;
Lawrence Easum, 69, of Crothersville, Jackson Co, IN, on 11 Feb 1899;
John P Burger, 59, of Crothersville, Jackson Co, IN, on 11 Feb 1899;
John M Hall (above), 53, of Crothersville, Jackson Co, IN, on 13 Feb 1899.