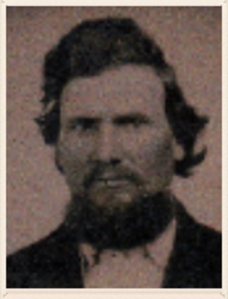 MILITARY:16 William Garriott was a private in Capt Levi's company, W Knudson's (Hudson's?) regiment, 9th Regiment Indiana Legion volunteers, enlisting on 16 Jul 1862. He guarded prisoners at Camp Morton, Indianapolis, IN (which later became the home of the Indiana State Fair Grounds). He "returned from service" about the 1st of Sep 1862-- less than two months in the service. He died five years later.

1897 MINOR PENSION:16 Laura A Harrod, a resident of Alpha, Scott Co, IN, and 33 year-old daughter of William W Garriott, filed, on 7 Aug 1897, for a rehearing on her minor's claim [claim 520.737]. "This claim was rejected on 1 Nov 1895 on the grounds that consumption, the disease of which the soldier died, was not due to his military service. She claimed her father's consumption was a result of chronic diarrhea, and indirectly the cause of death."
In an affidavit from his "bunk mate," James H Phillips, on 20 Apr 1897, stated, "That Garriott contracted diarrhea while in the line of duty about the first of August 1862 at Camp Morton, Indianapolis, IN while guarding prisoners."
In a General Affidavit Hiram P Carlock, 50, of Scott Co, IN, and James H Phillips, 47, on 20 Apr 1891, "Stated that they were members of the same organization with William W Garriott, guarding prisoners of war at Camp Morton, Indiana in the summer of 1862.
"They remember his condition very distinctly and know that he came home sick with diarrhoea and also know that he never recovered from said Camp diarrhoea. Affiant Kerlock saw said Garriott very frequently from date of his discharge to date of his, Garriott's, death and that during whole period the said Garriott was not able to work by reason of the said diarrhoea and during last two years of his life he was afflicted with terrible cough and spit up mouthsfull of yellow colored matter and he verily believes and does believe from which Dr Applegate told him, that the said Garriott died of Consumption resultant from his diarrhoea."