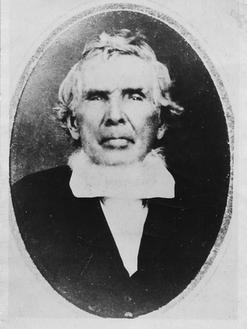 04-John W Sr Garriott    INDEX
Birth: 5 Aug 1796, Garrard or Henry Co, KY
Home: Carrollton, Carroll Co, KY
Death: 23 Mar 1878, near Carrollton, Carroll Co, KY- age 81
Burial: Garriott Cemetery
Father: Ambrose S Garriott
[DG photos: This picture-- believed by me to be that of John W Sr Garriott-- was presented to me as Ambrose S Garriott. However, since reliable photography was not available until shortly before the Civil War, this photo could not have been Ambrose S Garriott, who died in 1837. All the tombstones on this page were in a small family cemetery on a farm, in a cow pasture. They were all laying flat on the ground, covered in muck. There are other pictures of some of these stones on findagrave.com]

MILITARY: Capt Henry H Adcock, a prominent farmer and stock grower of Carroll Co, KY, was born in Nelson Co, VA, on 2 Jan 1829, and the sixth in the family of nine children born to Lawson Adcock and Nancy Gevandan, natives of VA, who moved to Carroll Co, KY, in 1844. He joined the War of 1812, having previously had charge of home guards. He was commissioned by Gov McGoffin in the 4th KY Calvary, Company E, and served five years in the Confederate War. At his surrender at Mt Sterling with his company, he received an honorable discharge. He was member of the Baptist Church.
Henry H(ines) Adcock, is written about in a book about the Civil War.  When he surrendered to the North he relinquished his horse. The North's Commander thought so much of Adcock that he gave him his horse "Billie Roan" back. At the reunion of the regiment, the horse is mentioned, the cost for returning the horse was an extravagant amount for the time.

[Diane Adcock Tokar] Don't know the name of the book. 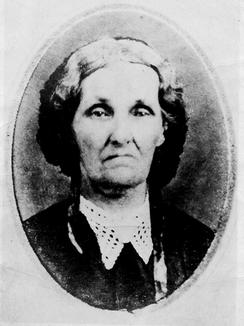