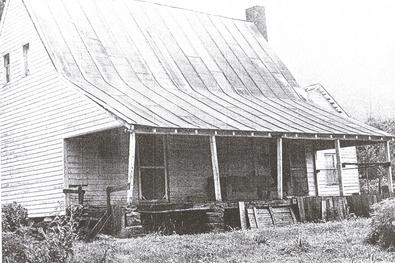 1823 INDENTURE OF TRUST: [Madison Co, Will Bk 7/347, dated 5 Feb 1823] Moses Garriott relinquished land on which he lived and land where Samuel Smith lived [which belonged to Garriott] for debts owed to William Jones in sum of $282.87, Thos Goodwin & Son (assignee of Wm Wright) in the sum of $15.62, and to John Glassell in the sum of $29.50. These properties were bounded by Reuben Yowell, Judith Bohannon, Humphrey Leatherer, Wm Henshanes, Adam Miller (deceased), Elijah Yowell, and Churchill Jones (deceased).-- about 300 acres. Also included is a piece of land Garriott purchased of Archibald Render and others, where William Story lived. Also included was the previous mentioned 93 acres-- same description-- and same personal property. Also the following slaves and other personal property, to wit: "One negroe man by the name of Amos, one by the name of Martin, one negroe woman by the name of Sil, one negroe girl by the name of Martha, one boy by the name of Albert, one negro boy by the name of Abraham, one negroe boy by the name of Nelson and one negroe boy by the name of Henry, twenty six head of cattle, six head of horses, six feather beds and furniture, two stills, one desk, two cupboards, one walnut folding table, one table, one wheat fan, one clock and case, twenty head of hogs, twenty had of sheep, four iron harrows, five cast pots, two ovens, two waggons, one cary plough, one bar-share plough, three shovel ploughs, seven hoes, and seven common chairs, with all and singular the appurtenances to the said tract or parcels of land belonging or in any wise appertaining and the future increase of the said female slaves."
"This deed of trust from Moses Garriott to Jno Morton for the benefit of William Jones, Executor of the last will and testament of Churchill Jones, Thos Goodwin & Son, and John Glassell was acknowledged, together with the mems? thereto, for the benefit of Simeon B Chapman, by the said Moses Garriott."

1841 DOWER RIGHTS RELINQUISHED: [Madison Co, VA Deed Bk 15/90, dated 29 Dec 1841] Moses Garriott and Elizabeth his wife relinquished all rights to one of the above properties when sold by Leonard and Henry Barnes to Abraham Yowell.

1868 ESTATE SETTLEMENT: [Madison Co, VA, Deed Bk 24/300, dated 11 Jan 1868] Marcus D Call, Administrator of estate of Elizabeth Garriott, deceased, deeded the house and four acres to Michael C Utz in 1868. Elizabeth Garriott acquired the house and four acres from Henry B Jones, William Withrow, James Withrow and William Gulley in 1842.61
On Route 603, west of Madison [VA], stands a home known by local people as the Garriott or William C Utz home. Mr Jones started the house and, when he ran short of finances, sold it to his brother, who completed it. The unfortunate Mr Jones built a smaller home nearer the road, which has been gone for many years.61
A date of 1824 appears on the west chimney, indicating that the present house was replaced by an older house because in 1803 William and Sarah Jones of Fredericksburg deeded four acres with appurtenances, which was part of 13 acres bought from Daniel Utz, to David Jones. Pascal Early acquired the house and land from the Jones.61

[photo courtesy of Vee Dove, The Houses of Madison County 61 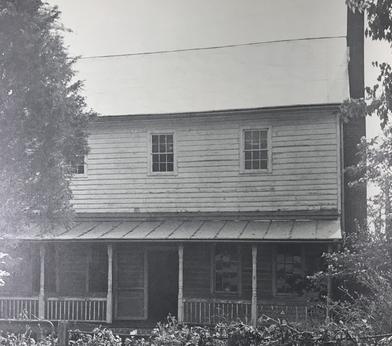