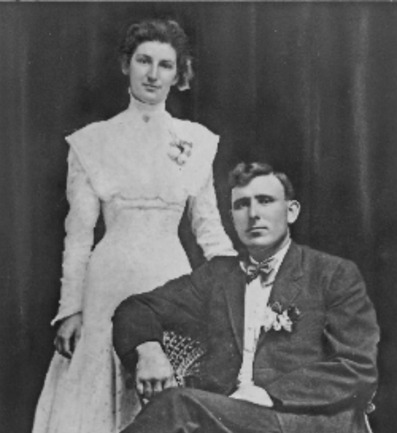 ​​[photo courtesy of Hurby, Lillie, and their family]

BIOGRAPHY: Hurby farmed in Jasper Co, IN until 1939, then Clinton and Tippecanoe Counties for ten years before moving to Mulberry, IN in 1949.

1957 OBITUARY: Hurby Garriott Sr, who was born in Rensselaer seventy-four years ago, a son of Albert M Garriott and Phoebe (Perry) Garriott, and a retired farmer of Mulberry, died at St Elizabeth Hospital in Lafayette at 3:20 am, Thursday. He had been ill for four weeks.
Mr Garriott farmed near Rensselaer before going to Clinton County where he farmed for ten years. He moved to Mulberry in 1949. His marriage to Miss Lillie Hurley took place in 1913.
Surviving with the widow are seven sons, Burgin M and George D, both of Mulberry; David M and Howard, both at home; Hurby Jr and Arlon, both of Lafayette; and Lawrence of Crawfordsville; three daughters, Mrs Eleanor Miller of Detroit, Mrs Orabelle Pribie of Frankfort R6 and Mrs Aletha Steiner of Lafayette; two brothers, Roscoe of Williamsport and John of West Lebanon, and two sisters, Mrs Etta Porter of Indianapolis, and Mrs Carrie Walker of Gary.

2008 OBITUARY: Frances Jane "Janie" Garriott, 78, of Mulberry, died Saturday, April 19, 2008, at Methodist Hospital in Indianapolis. Mrs Garriott worked at Purdue University in West Lafayette for 22 years as a clerk in the residence halls. Born July 11, 1929, in Tippecanoe County, she was the daughter of the late Virgil and Florence Licklyter Morrison and a life resident of Mulberry. She attended Jefferson and Mulberry high schools, both in Clinton County.
She was a member of Mulberry United Methodist Church, where she had worked in the kitchen helping with Mulberry Community Club, funeral dinners, and weather disasters. She was active in Kid's Club and the opening of Abba's Place and a past member of Mulberry Mother's Club and Junior Women's Club. She was an avid fan of Purdue men and women's basketball and the football team.
She married Myron Burgin Garriott on June 28, 1947. He died June 2, 2004.
Surviving are seven children, Larry Garriott of Lafayette, Linda Weeks (husband: Doug) of Plainfield, Randy Garriott (wife: Donna) of West Lebanon, Ronda Hall of Frankfort, Rick Garriott (wife: Debby) of Mulberry, Lorie Cook (husband: Tom) of Lafayette and Lisa Scott (husband; David) of Frankfort; three sisters, Louise Sharp of Frankfort, Vera Rohler (husband: Jack) of Lafayette and Ruth Brettnacher of Florida, and a brother, Paul "Butch" Morrison of Frankfort. Surviving are 21 grandchildren, 18 great-grandchildren. Memorials: Mulberry United Methodist Church.

2015 OBITUARY: Norma Lucille (Patrick) Garriott, 77, of Lafayette, passed away at 12:30 am Tuesday, March 31, 2015 at St Mary's Healthcare of Lafayette. She was born April 11, 1937 in White County, the daughter of the late Edward F and Gladys E (Dunk) Patrick. Norma was a 1955 graduate of Chalmers High School. Her marriage was to David M Garriott on Jun 8, 1957 in Lafayette and he survives.
Norma was a secretary at Purdue University's Department of Forestry and Natural Resources for 42 years, retiring in 1999. She was a member of Christ United Methodist Church and enjoyed puzzles.
Surviving with her husband are two sisters, Sharon E Davis of Huntsville, AL, and Mary E Pemberton of Fairmount, IN; seven brothers, Elmer F (Doris) Patrick of Lafayette, Donald L Patrick of Pahrump, NV, Ralph H Patrick of Lafayette, Homer A (Suzie) Patrick of Largom FL, R Evan (Rosemary) Patrick of Lafayette, Roy A (Dorothy) Patrick of Lafayette, and James A (Mary Lou) Patrick of Mt Pleasant, MI. She is survived by many nieces and nephews. Preceding her in death with her parents are two brothers, Kenneth and Roger Patrick.
Visitation will be from 5 to 8 pm on Thursday at Hippensteel Funeral Home wirh funeral service at 10 am Friday at the funeral home with Rev Scott Mann officiating, Entombment to follow at Rest Haven Memorial Park. Memorial contributions may be made to the Juvenile Diabetes Foundation (10401 N Meridian St #150, Indianapolis, IN 46290). Share memories and condolences online.