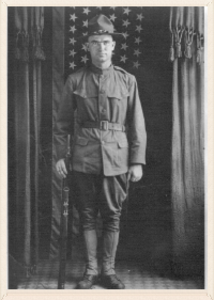 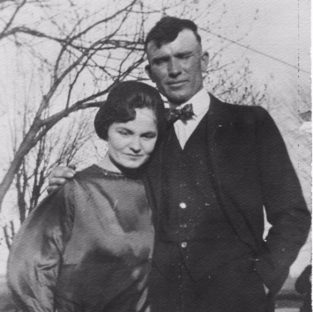 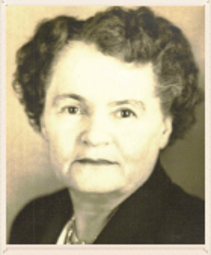 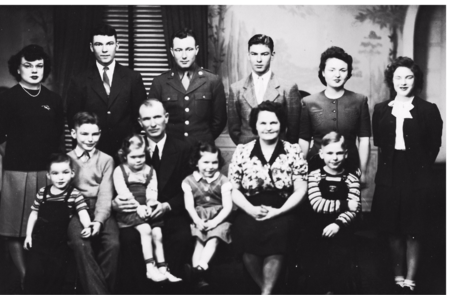 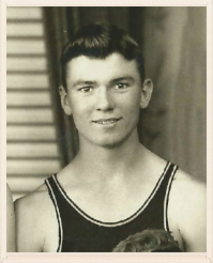 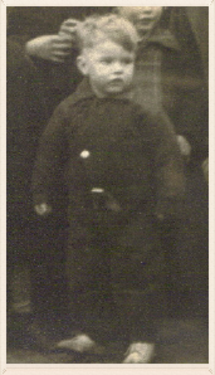 the actual page-- after 80 years of use-- was missing, although this couple

during the Korean Conflict. He was a Private 1st Class, inducted 28 Sep 1950 in

farmhouse where the family lived in Benton County, IN. He was hit by a truck

driven by a teenage son of a neighbor and was killed.  Perry was called from

the field and hustled Gordon to the hospital in Lafayette.  Iva did artificial respiration

during the drive, but he died at the hospital.

BIOGRAPHY: Perry was born in Jasper County, IN. He rented and farmed near Pleasant Ridge in Jasper Co, IN. Later, about 1921, he was a sharecrop farmer [320 acres] west of Fowler, IN, in Benton County near Freeland Park. He also farmed 100 acres of his own land near Wadena, in Benton Co, IN. In 1948 he sold the 100 acres and purchased a 240-acre farm in Gilboa Township, Benton County, IN, south of Remington. He died the following year. His obituary states he was a former resident of Freeland Park, Indiana, and that he died at St Elizabeth's Hospital in Lafayette, Indiana where he had been for three weeks.

MILITARY: 23 Perry was a World War 1 veteran [US 2.376.872].  Prior to military service Perry worked in Cadillac, MI, for three months in the "Ruttle Room" of a foundry that cleaned and smoothed up castings. Prior to that he worked for his father on the farm in Jasper County, IN. He joined the army on 22 Sep 1917 at Columbus Barracks, OH, had basic training at Ft Sill, OK, and was shipped to France in November of 1918. The war ended during his voyage to France, and, in January 1919, he was shipped back to the United States and discharged February, 1919. After returning from the war, he married Iva Fern Blankenship of Jasper County, IN.
PENSION: 23 In June, 1931, Perry applied for a disability pension [C-1.809.322] claiming heart trouble. He had been treated at the base hospital at Ft Sill, OK, from 8-16 Oct 1918 for influenza and valvular heart disease. He was described as 160#, 72" tall, with brown hair, blue eyes, and ruddy complexion.
A service connection was initially denied for aortic insufficiency, mitral insufficiency, and chronic adhesive pericarditis not shown during service or at discharge. He was approved for a 50% disability [T- 1.285.577] on 13 Nov 1931 and received $18 a month. In 1936, his disability was increased to 60%. Just eight months prior to his death, his pension was increased to include up to three minor children.

1949 OBITUARY: Perry Garriott, a soldier of World War I, and member of a once well known family in Jasper County, died at St Elizabeth's Hospital in Lafayette at 8:20 o'clock Thursday morning. His death followed a protracted decline and three weeks of hospitalization. Death was due to heart complications.
The Garriott residence is south of Remington.
Mr Garriott was born in Jasper County April 12, 1894. He was a son of Albert Garriott and Phoebe (Perry) Garriott. He was reared on a farm and attended schools of this county. He entered the armed service shortly after the outbreak of war. Following his military service he returned to Jasper County and on March 24, 1922, he was married to Miss Iva Blankenship. The couple lived on a farm near Pleasant Ridge for a few years after which they established residence on a farm west of Fowler where they lived for 26 years, before going to the farm where he resided at the time of his death.
Surviving besides the widow are the following children: Mrs William Tabb of Martinsville, Elvin Garriott of Goodland, Mrs Lulabelle Cole of Lafayette, and Donald, Gerald, Joan, Max, Franklin, Janice, Doris and Douglas at home. Also surviving are the following brothers and sister, Roscoe of Judyville, Herbert of Mulberry, Mrs Everett Walker of Gary and John of Attica.
The funeral services will be held from WJ Wright Chapel at 3 o'clock, DST Sunday afternoon. The Rev Peter Heemstra of Shadeland will be in charge. Interment will be at the home south of Remington until time for the funeral.

WIDOW'S PENSION: 23 At Perry's death in 1949, Iva applied for a widow's pension for herself and six minor children. She received this pension until her death in 1993.

BIOGRAPHY: Iva Blankenship's brother Clarence introduced her to his friend and neighbor, Perry Garriott. Iva attended the Indiana Academy in Cicero, Indiana. She was listed as a senior at Rensselaer High School in the 1922 yearbook but left, however, before graduation.